I've been using the Camp Chef Woodwind for a couple of years now and loving every minute of it but recently they introduced a brand new member of the Woodwind family called the SG. This new grill, or smoker as I call it, has a lot of new features and I'm going to walk you through and introduce each one.

If you came here knowing you already wanted to buy it, then here's the link for that. Otherwise, read on and I'll give you the full scoop.

When the SG arrived, it was on a pallet, well packaged and wasn't difficult for one person to put together. I had to install legs, chimney, handles, and the searbox which didn't take more than an hour.

For some reason, I did not take a picture of this! It had to be the utter excitement of getting a new toy.

I did have to spend a little time wiping down the bare metal parts as they had something that smelled like diesel on them but I figure it was probably mineral oil or something similar to prevent rust during storage and shipment.

As with most grills and smokers, it is highly recommended to season it or do a burn-in to make sure there are no oils or residues used in manufacturing left on the metal that might affect the taste of the food that you are cooking.

The slow way to do this, which I like better since it imparts some smoke and leaves a nice smoky residue on the inside walls of your smoker, is to run it at about 225°F for a couple of hours. Then you are fine to use it as normal.

The faster way to do this is to run it at about 350°F for 45 minutes. This burns off oils, glue, residue, etc. that might be on the inside of the smoker and ensures that it is cook ready.

Pick one of these methods and get ‘er done!

So what in the heck is “Slide and Grill”? Well it's a new technology that Camp Chef has come up with to allow for a direct heat grill-like experience inside the smoker.

It does this by allowing you to slide the flame/heat deflector back and forth via a knob on the lower left side of the smoker body. Pulling the grill knob straight out moves the deflector away from the firepot and the flames leap up a lot higher giving you some pretty hot heat coming through those vents in the drip tray.

Here's the knob on the side of the unit: 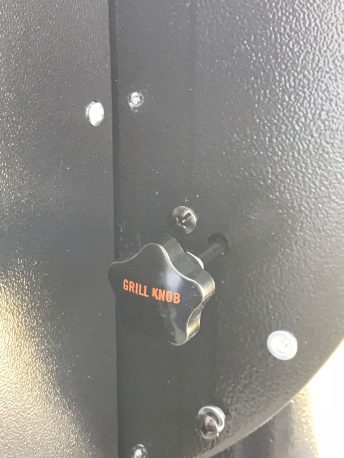 At this setting the heat deflector is over the firepot.

But when you pull the knob out to the left, the deflector moves away from the firepot and allows the fire to come up to grate level. 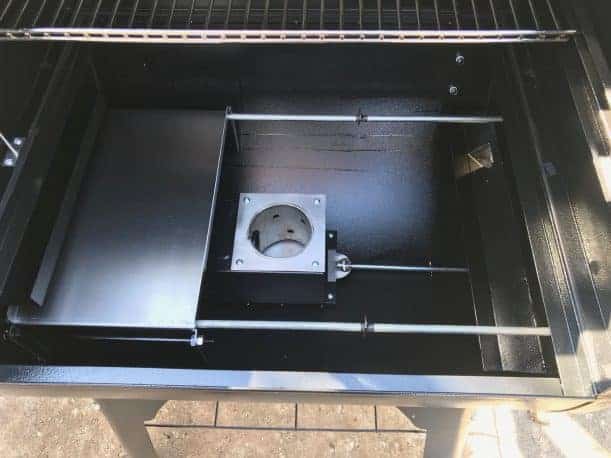 The drip pan is no longer flat on the bottom but has cutouts or fins angled down toward the grease trough. This allows the grease to drain like usual but when you want some direct heat, those cutouts allow the heat to come through.

The bad side to this is that I like to cover the drip pan with foil to keep it nice and clean and now, with these new cutouts, you can't use foil. 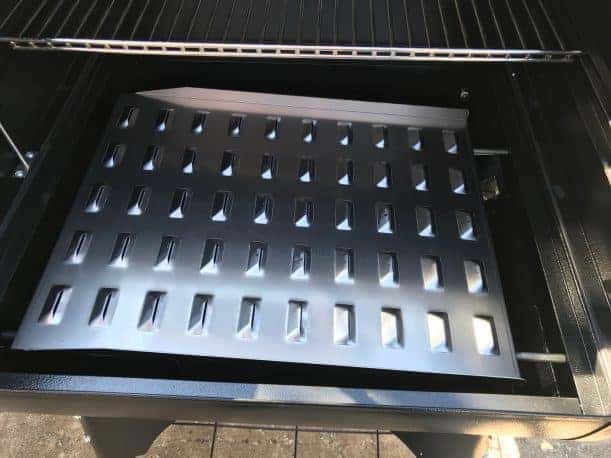 and a close-up of those cutouts.. 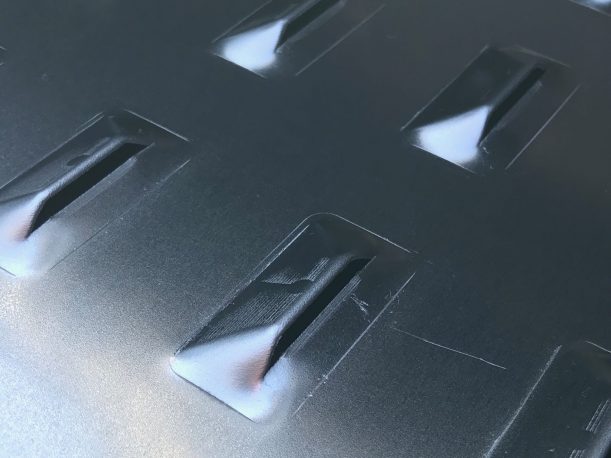 That– is slide and grill technology.

Here's an artist rendering of what it should sort of look like in real life: 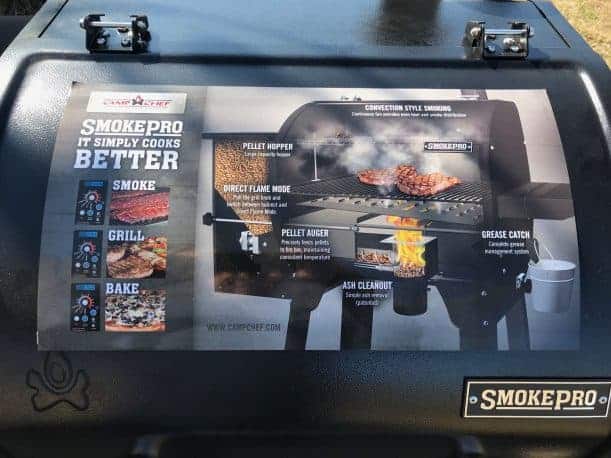 As you can imagine, most of the high heat is from the middle to the right side since the heat deflector sort of blocks the left side. This technology paired with some grillgrates will give you some grill marks but it just feels redundant when I have a searbox right there on the right side, attached to the unit.

Here's a video of some hot dogs to show how it works:

Because of how the cutout holes are angled, grease still runs down this drip pan into the trough and then down into the bucket that hangs on the outside of the smoker. 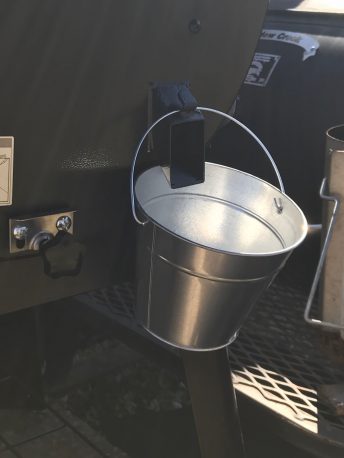 The original woodwind has a bottom rack that measures about 22 inches wide and 19.5 inches from front to back giving you just over 400 in² of cooking space. It also has a partial rack on top which it calls a warming rack but I've used it numerous times to cook on and it works just fine.

The SG model has increased the height of the cooking chamber and added a full size 2nd rack on top. It's 22 inches wide and about 18.5 inches from front to back for another 400 in². 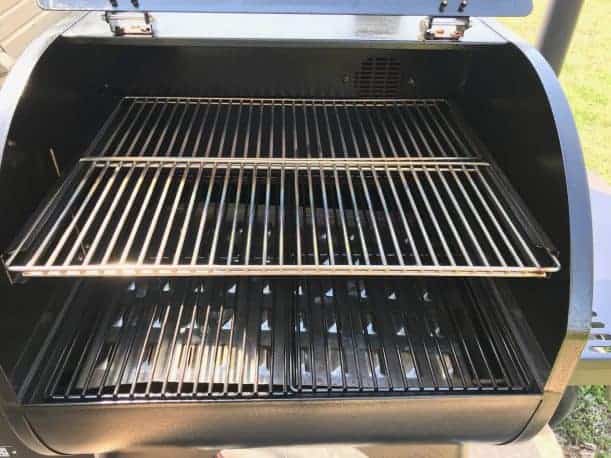 This means the SG has a total of just over 800 in² of cooking space. More than the original Woodwind and more than the REC TEC.

Another sub-feature of the cooking grates, since we are talking about them, is the fact that they are now split in half. I got pretty excited when I found this out since that means I don't have to play “see if you can fit the racks in the dishwasher” game anymore.

The hopper on the original Woodwind held 18 pounds which I never understood since most bags of pellets are 2o pounds. This means every time you fill it up, you are left with a couple of pounds in the bag which you then need to seal up so they won't get damp and then store them somewhere and hope you don't forget where you put them.

The SG has solved this issue.. it now holds 22 pounds of pellets which means it can hold a full bag with some room left over and if you happen to find any of those old bags of leftover pellets lying around, you can pour one of them in with it.

The SG also now has a clear window on the front so you can see how many pellets you have in there at a glance. 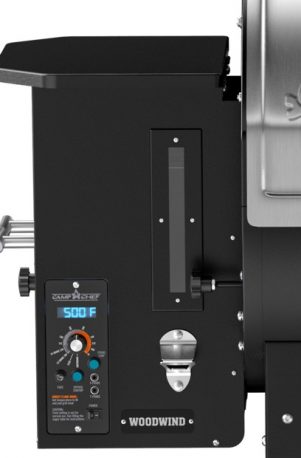 Just like on the Woodwind, there's a really handy chute in the back of the hopper with a pull handle that makes it really easy to dump the pellets into a bucket or other container when you want to change them out or if you need to clean the hopper. 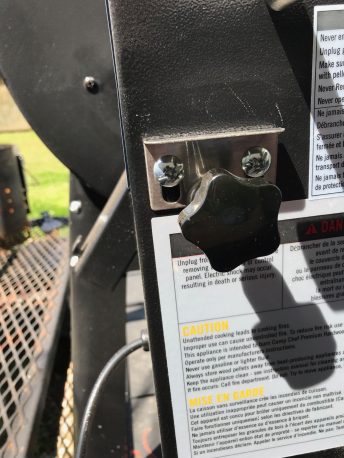 Another feature from the original Woodwind that was brought over to the SG is the ash cup on the very bottom of the smoke chamber. Note that this does not catch ALL of the ashes but it does a great job of getting them out of the firepot which is the ones that can cause a problem if you don't maintain it. 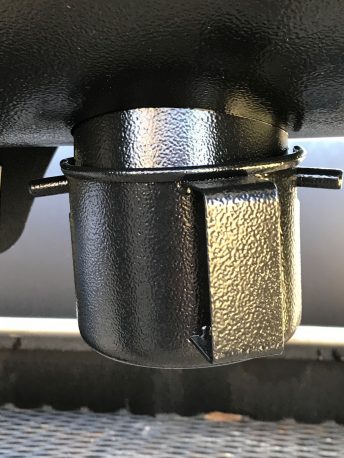 Occasionally you do still have to vacuum the ashes out of the bottom of the smoke chamber. I vacuum mine every time but I have a tendency to be compulsive like that.

I have heard that it's a great idea to let the ashes build up on the bottom of the smoke chamber in the wintertime to act as an insulator and help hold in the heat. I haven't tried this but if anyone has, feel free to share your thoughts about this in the comment area below.

I love the searbox and think it's one of the greatest things that anyone has added to a pellet smoker in a long time.

The searbox attaches to the right side of the unit and is basically a propane grill that cooks at up to 900°F.

It operates on propane, has a lid that opens and closes and a single knob to control the level of heat that you want.

The cooking grate for the searbox is make of cast iron which everyone knows gives you the best grill marks. The ribs of the grate are raised to really lay on some beautiful grill marks. 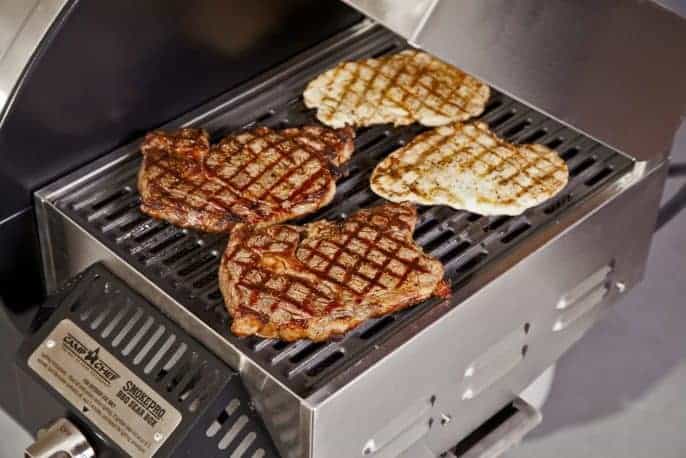 A really great feature in my opinion!

Note: The SG is also available with a griddle called a “Sidekick” if you prefer that over the searbox. You just select that option when you purchase.

This is the part of the smoker that controls the heat and one of the things that most people complain about. The controller on the SG, like most pellet grills and home ovens, works on an average temperature, not exact temperature.

Test your home oven and you will no doubt see this in action. No one complains because it still bakes great cakes, biscuits, pies, etc. AND it doesn't advertise on the stove display screen that it is 25°F above or below your set temperature.

Pellet grills advertise it on the display and therefore it bothers us.

Average temperature cooks just as well as exact temperature in my opinion. There are pellet smokers which holds a perfect temperature and while that is nice, it doesn't cook any better, have better flavor or get things done any faster.

So, in my opinion, cooking based on average temperature is not a bad thing if you can learn to just leave it alone and let it do it's thing.

The SG fluctuates up and down approximately 15 to 20°F with the range being wider on the (2) specialized “Smoke” settings than on the regular settings.

The controller has inputs for dual probes which are included. These can be used to monitor the meat temperature and/or the pit temperature. 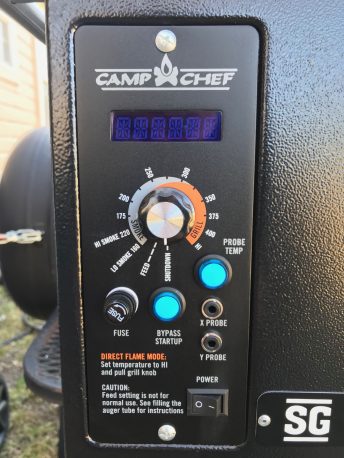 Good Deal or Not?

All in all, the Woodwind SG by Camp Chef is quickly becoming my favorite pellet smoker with all of it's features, extra cooking space with the double full-sized racks and the larger 22 pound hopper. The slide and grill technology is nice but I don't find myself using it that much as I usually fire up the side searbox instead.

It is well worth the $999 that it costs and with free shipping and a 3 year warranty, it's a really great buy.

Check it out on CampChef.com