If you've ever wanted to make your own pastrami at home for St. Patrick's day or just because you like the stuff, then the time is now. This tutorial is part one of two– I will walk you through the easy steps of preparing and curing your own brisket.

In part two (located HERE), I'll show you how to do some final preparation and then smoke it to turn it into something absolutely juicy, tender and mouth watering!

To Make 1 Gallon of Curing Brine

Please note that my rubs and barbecue sauce are now available in 2 formats-- you can purchase the formulas and make them yourself OR you can buy them already made, in a bottle, ready to use.
Step 1: Trim the Brisket

I purchased a 16 lb prime grade packer brisket from my favorite local warehouse store and decided to remove most of the outer fat since it had so much fat marbling in the meat.

Here's the one I got, fat cap side down: 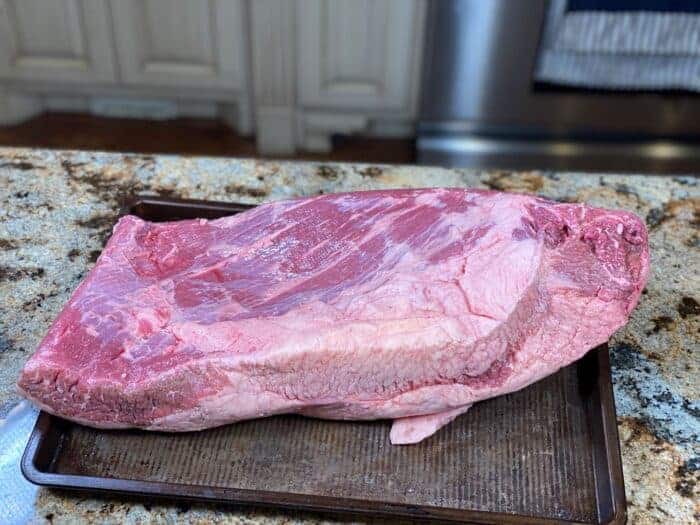 As you can see, removed the big pocket of fat on the side of the brisket first: 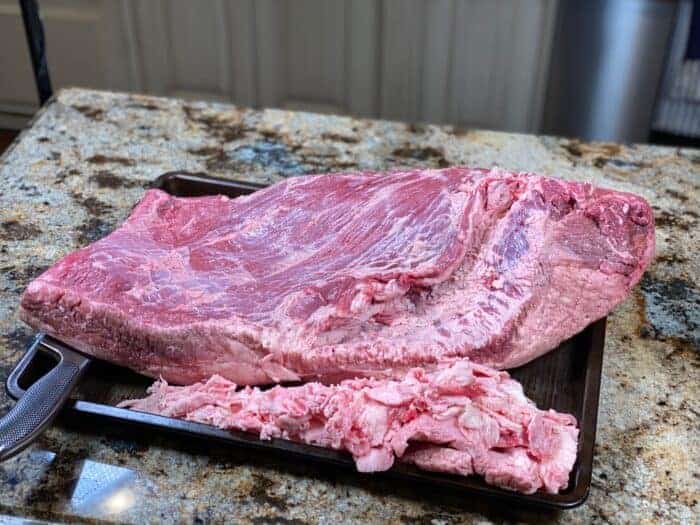 I then flipped it over to fat cap side up. 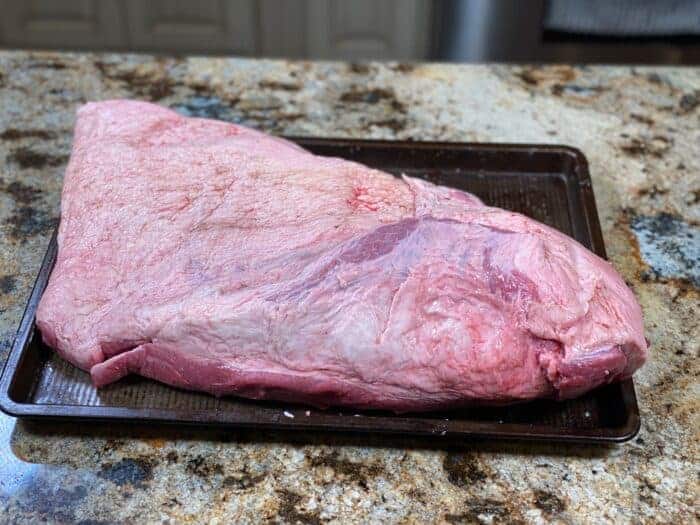 Because my aim is to cure this brisket and then smoke it, I removed most of the outer fat so the cure could have direct contact with the meat.

I went a little crazy with it but as you can see, plenty of intramuscular fat to keep it moist while it smokes. 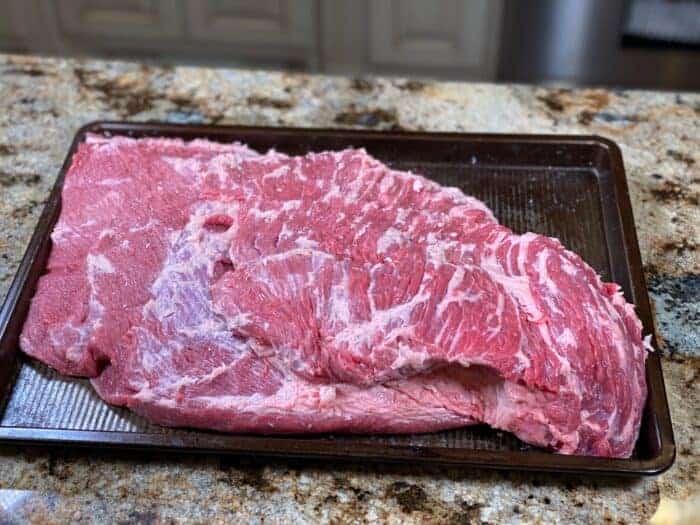 You do not have to be as brutal as I was about it and if it's a choice brisket or has less fat marbling, it's probably a good idea to leave at least some of the fat on the flat (left side of image above) of the brisket. The point (right side of image above) of a brisket is pretty fatty and can stand to have most of the outer fat removed regardless of the grade.

This thing is ready for curing!

This recipe is a slight modification of “Pop's Brine”, a recipe that has been used for a very long time by Pops, a member at SmokingMeatForums.com passed down from his father who owned a grocery/meat store for many decades. 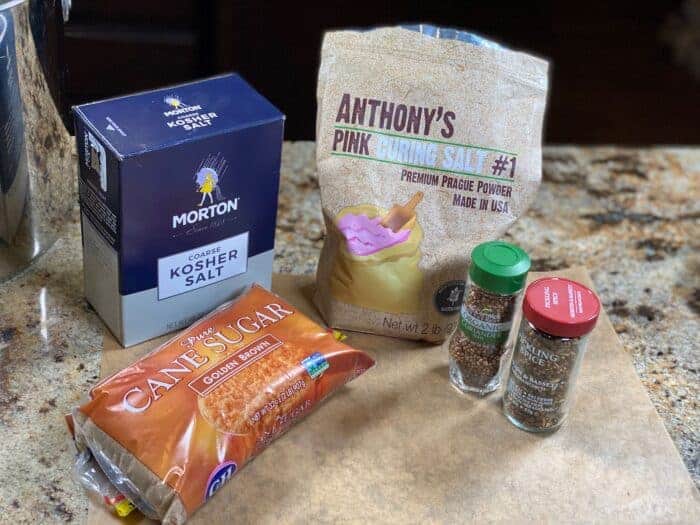 This curing brine is not based on the weight of the meat and requires no heating to make. It is extremely easy and anyone that uses it, rarely uses anything else. I have used it for bacon and a number of other things including this homemade pastrami with the addition of pickling spices.

The maximum allowed concentration of curing salt is 3.84 ounces per gallon of water and Pop's brine uses 1 ounce (equivalent to a heaping tablespoon) per gallon. Not only does it work marvelously well, it is only 26% of the maximum allowed ratio so it's very safe.

If you can't find curing salt #1 locally, you can grab some on Amazon for around $10 for a 2-lb bag.

This is the kind I use:

I ended up needing 3 gallons of curing brine for my 16 pound brisket so I had to triple the recipe.

Make Pop's brine by adding a gallon of cold water to a pitcher or other non-reactive container. I used a large stainless steel pot since I was multiplying the recipe. 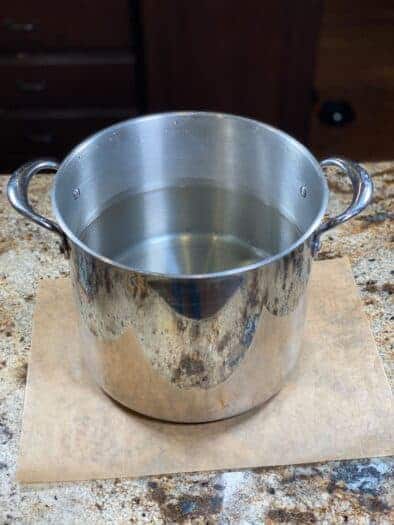 First add the curing salt #1 and the coarse kosher salt. When you first add these, the water will be very cloudy 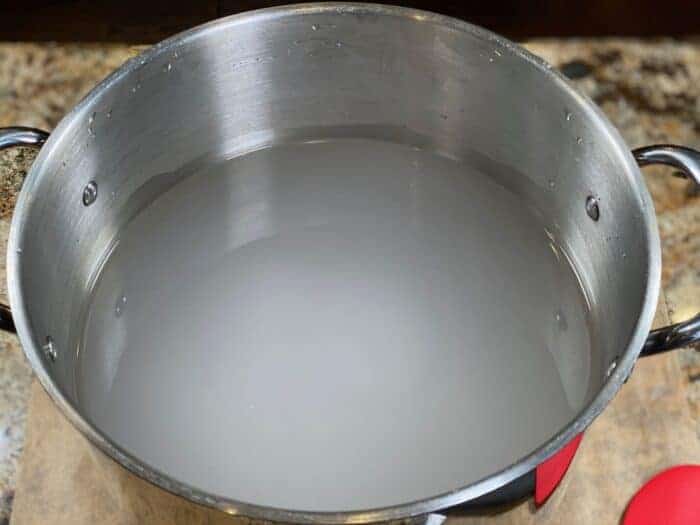 Stir for about 2 minutes or until it returns to clear again. This is a way of knowing when the salt has been completely dissolved. 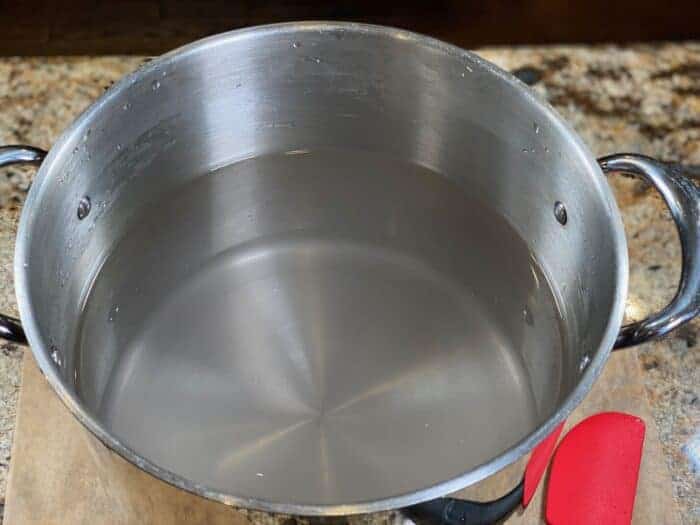 After the water is clear again, add the brown sugar and stir until it's dissolved.

The curing part of this brine is complete but since it's going to be pastrami, we need to add the traditional pickling spices to give it the correct flavor profile. I purchase pickling spice already made up but you can make your own if you have your own recipe.

I recommend about 2 tablespoons of pickling spice per gallon of water AND I recommend toasting it before adding it to the water. This is not something you have to do but I feel like it helps to bring out the flavors a little better.

Place a iron skillet on the stove and heat it on high. Pour your pickling spices in the pan and keep the spices moving around for about a minute or until you start smelling the aroma.

Quickly transfer the toasted spices into the water and give it a stir. 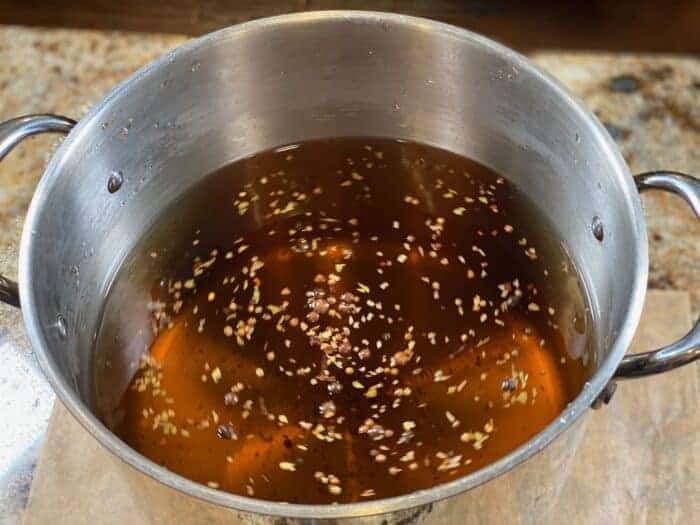 Place the brisket down in a large food-safe plastic, glass or non-reactive container and pour the curing brine over the top to cover. 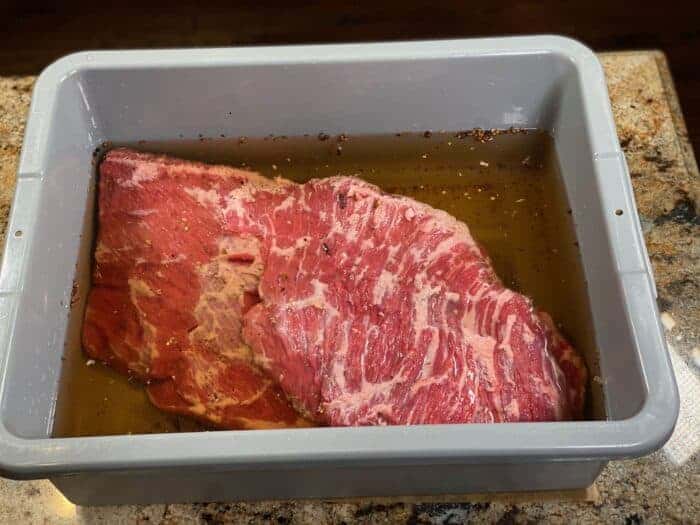 As I mentioned, I ended up needing 3 gallons to cover this big hunk of meat and because my pan was pretty large. I made 2 gallons initially and then went back and made another gallon real quick when I saw that I needed it.

Once covered, the brisket tried to float so I placed a heavy plate on top and then a zip top bag filled with water on top of that to keep the meat submerged. 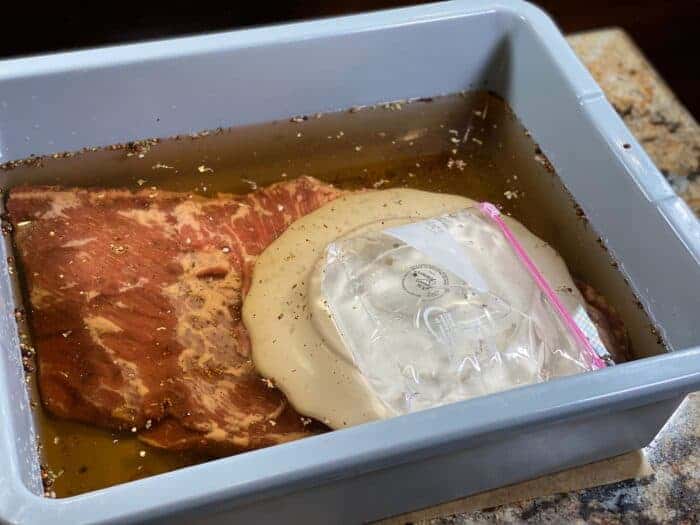 I did not have a lid for this pan so I covered the best I could with foil.

I recommend writing the planned finish date on the foil with a sharpie. 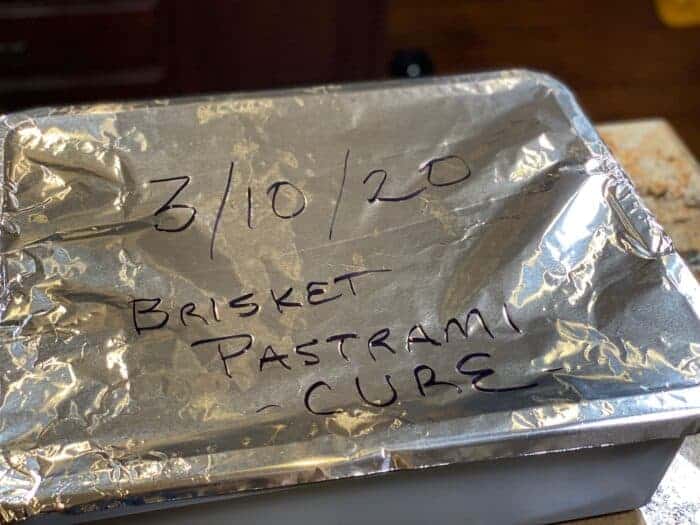 I don't do these often but a large dedicated brining pan with a fitted lid would sure be nice.

Place the container in the fridge.

I recommend curing at least 6 days but you can go as much as 10-12 days if you want or need to. Because St. Patricks day is just 12 days away, how long you cure will be determined by how quickly you can get what you need and what day you plan to cook it once it's finished curing.

Every day during the curing process, go out to the fridge, remove the cover and flip the brisket over to make sure the cure is able to move through the meat evenly.

Don't stress if you miss a day somewhere but try to do it everyday and it will reward you.

See part 2 where we smoke this thing up– HERE

Please note that my rubs and barbecue sauce are now available in 2 formats-- you can purchase the formulas and make them yourself OR you can buy them already made, in a bottle, ready to use.
Purchase the Formulas for Jeff's Rub and Sauce
**Instant Download!** 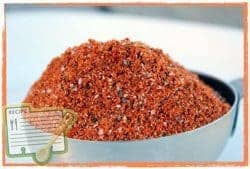 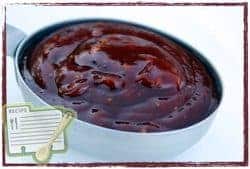 ***Note: you get the Texas style rub recipe free with your order!

If I could give these recipes away, I would do that. I really want you to have them! But, then, this is how I support the newsletter, the website and all of the other stuff that we do here to promote the art of smoking meat.

I recently purchased both recipes. The files did not come thru right but Jeff was prompt to get it fixed. I tried them both last weekend and they were a huge hit. I followed his burnt ends recipe to the letter and my neighbors thought I was some master chef! Thanks Jeff!  -Susan T.

Thank you for the great advice. Followed your rib recipe and everyone loved them. Used your rub and sauce. On point!  -Charles W.

Love the sauce and rub recipes. So far I have used them on beef ribs, pork ribs, and different chicken parts. Can't wait to do a beef brisket. Texas rub is great as well!  -Peter S.

Love the original rib rub and sauce! We have an annual rib fest competition at the lake every 4th of July. I will say we have won a great percent of the time over the past 15 years so we are not novices by any means. However, we didn't win last year and had to step up our game! We used Jeff's rub and sauce (sauce on the side) and it was a landslide win for us this year! Thanks Jeff for the great recipes. I'm looking forward to trying the Texas style rub in the near future!  -Michelle M.

I tried the rub on a beef brisket and some beef ribs the other day and our entire family enjoyed it tremendously. I also made a batch of the barbeque sauce that we used on the brisket as well as some chicken. We all agreed it was the best sauce we have had in a while.  -Darwyn B.

You see the raving testimonies and you wonder, “Can the recipes really be that good?”

No worries! Make up a batch and if it's not as good as you've heard.. simply ask for a refund. Now that's a bargain and you know it. Let's review:

Well.. what are you waiting for.. click on the big orange button below to order the recipes now.

Order Jeff's Rub Recipe n' Sauce Recipe
I really, really appreciate the support from my newsletter friends and be sure to let me know if you have any questions about this.
Jeff's Smoking Meat Book 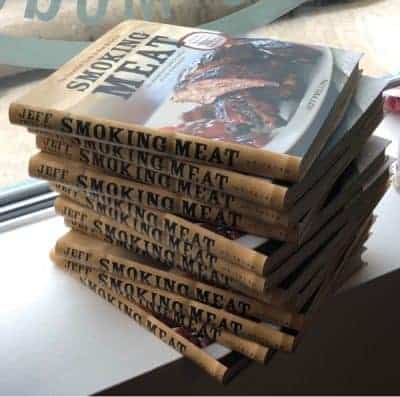 The book is full of recipes and contains tons of helpful information as well. Some have even said that “no smoker should be without this book”!

With more than 900 reviews on Amazon.com and a rating of 4.7 out of 5 stars, it comes highly recommended.

It is a Bestseller in Barbecueing & Grilling books on Amazon.

The next time you decide to order something at Amazon.com, use THIS LINK to get there and we'll get a small commission off of what you purchase. 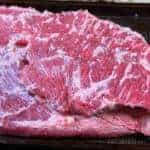 In this recipe, I will walk you through the easy steps of curing your own brisket to turn it into something absolutely juicy, tender and mouth watering!
Prep Time30 mins
Course: Entree, Main
Cuisine: American, Hot Smoking

FREE Smoker Recipes in your Inbox
No big words– just clear instructions and how-to images
Give it a try, single-click unsubscribe at any time if you change your mind.
2020-03-12T02:23:05-05:00By Jeff Phillips|9 Comments 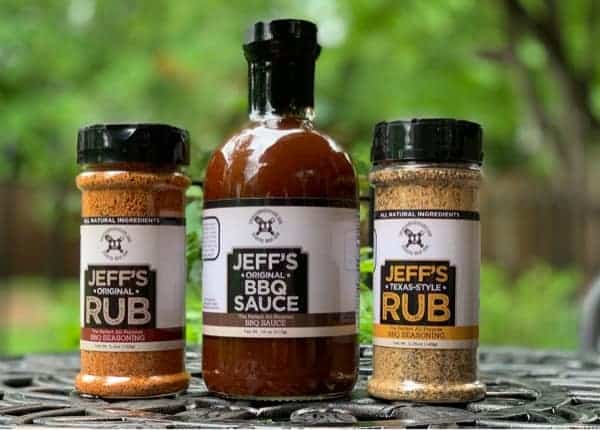 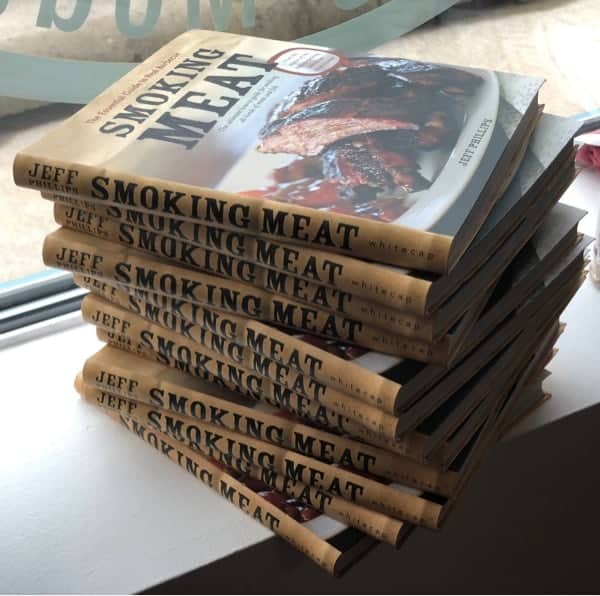 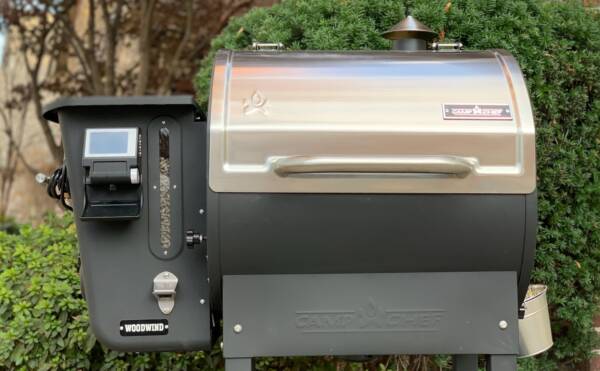 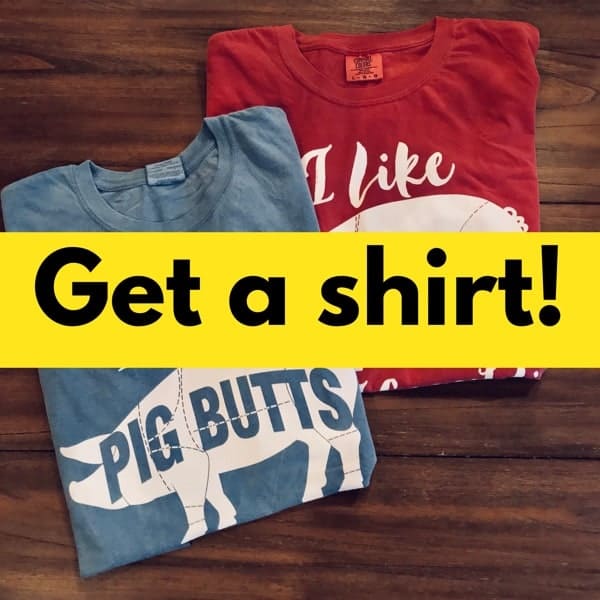 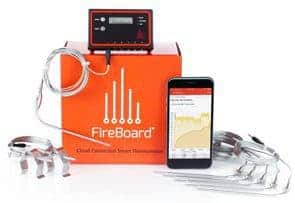 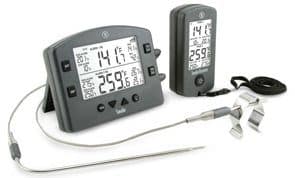