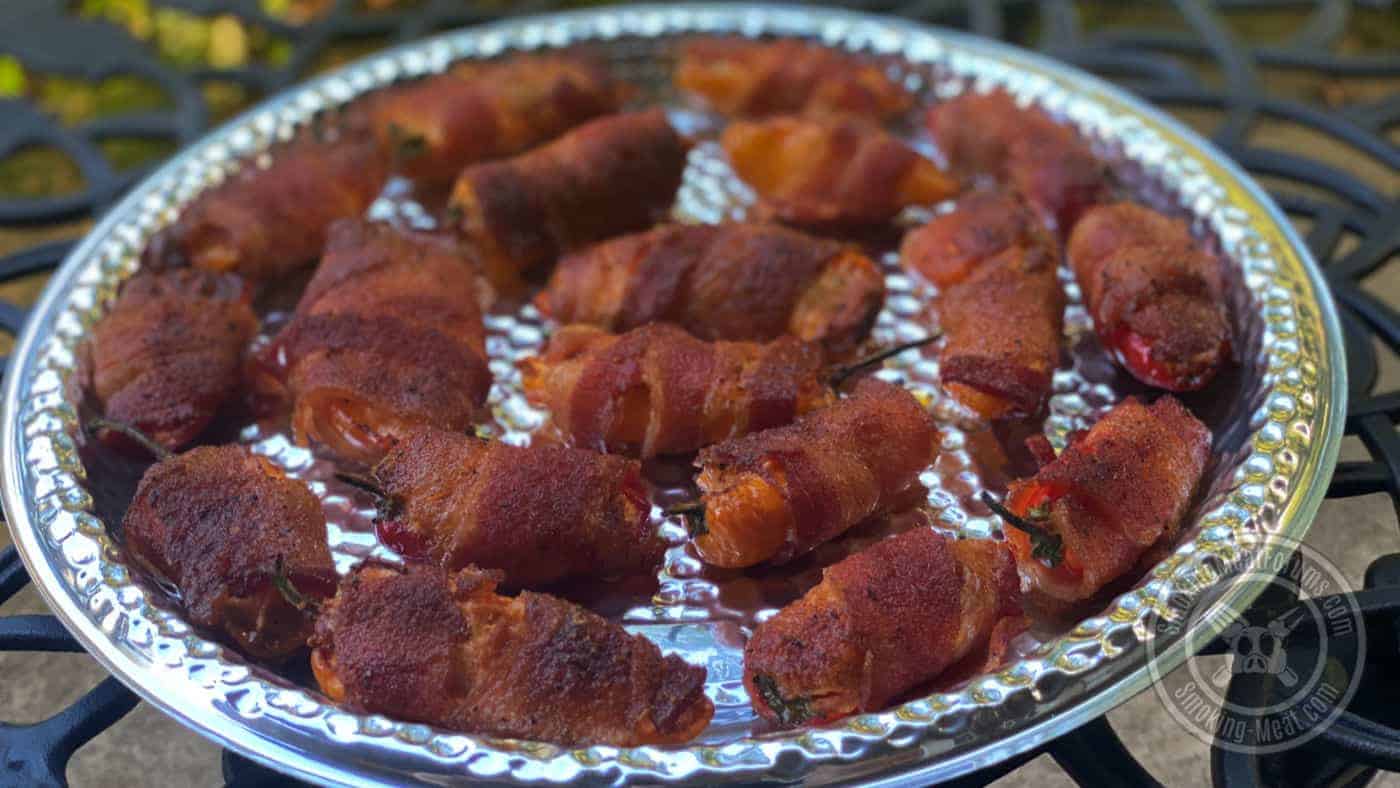 I've been making stuffed jalapeños (a.k.a ABT's or atomic buffalo turds) for many years but every once in a while I'll get an email asking me how to make them NOT so hot.

Tip: you can soak the jalapeños in sprite or 7-up or some other citrus soda for a few hours or even overnight to leech out the “hotness”

Another really great option is to just use mini sweet peppers.

To make them even better, I've added cooked ground sausage to the mix as well as my very own Jeff's original rub (Purchase formula here | Purchase bottled rub).

Did I mention these are wrapped in bacon?😍

Please note that my rubs and barbecue sauce are now available in 2 formats– you can purchase the formulas and make them yourself OR you can buy them already made, in a bottle, ready to use.
Step 1: Cook Sausage

Place about 1/2 cup of ground sausage into a small to medium skillet and cook it over medium low heat until it is browned through.

Place the cooked, crumbled sausage onto a double layer of paper towels to absorb any extra grease and set aside.

While the sausage is cooking, cut peppers in half lengthwise to make boats. Each pepper makes 2 boats. 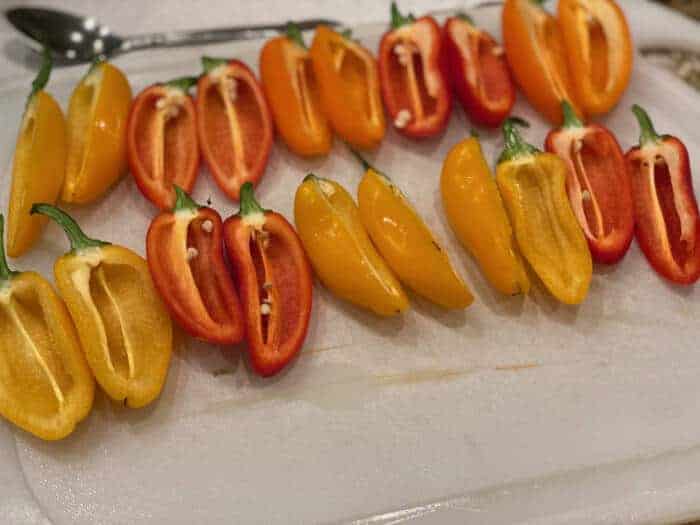 Use a spoon, grapefruit spoon, melon baller, etc. to scoop out the seeds and some of the white ribs on the inside.

Set the peppers aside and let's make the mixture that we will stuff inside of the boats.

I usually just use my hands but a mixing spoon or even a fork works well if you prefer that. 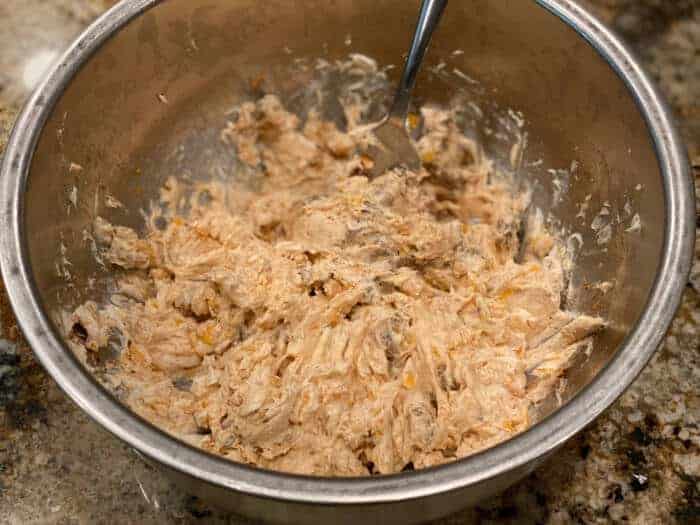 Stuff the cream cheese mixture into each boat level with the top. 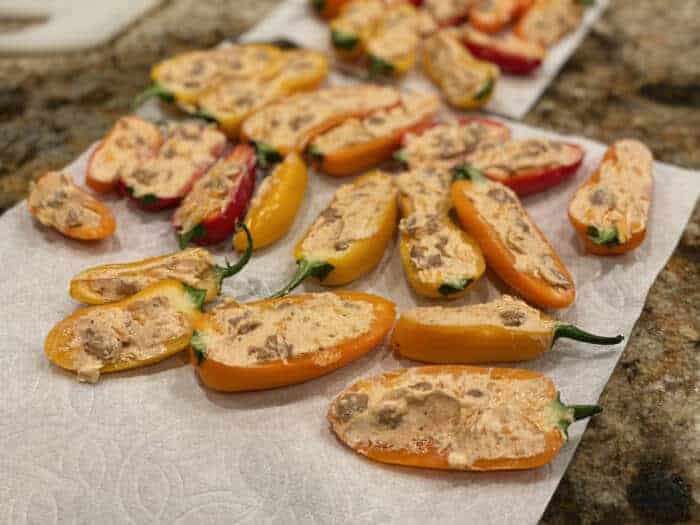 Note: Size varies but most of these peppers were on the small/shallow side. I was able to stuff about 20 peppers (40 boats) with this amount of stuffing mixture. Your mileage may vary.

Wrap a half strip of bacon around each boat.

Some people use a toothpick to secure the bacon but I have not found that to be necessary.

I like to place the finished peppers on a pan with a rack (here's the one I use) for easy transport to and from the smoker. 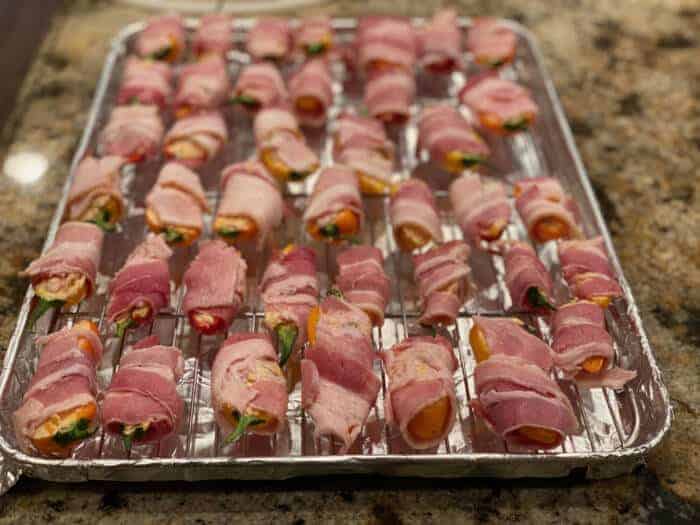 Sprinkle Jeff's original rub (Purchase formula here | Purchase bottled rub) onto the top of each one to add another layer of delicious flavor.. now they are ready to smoke! 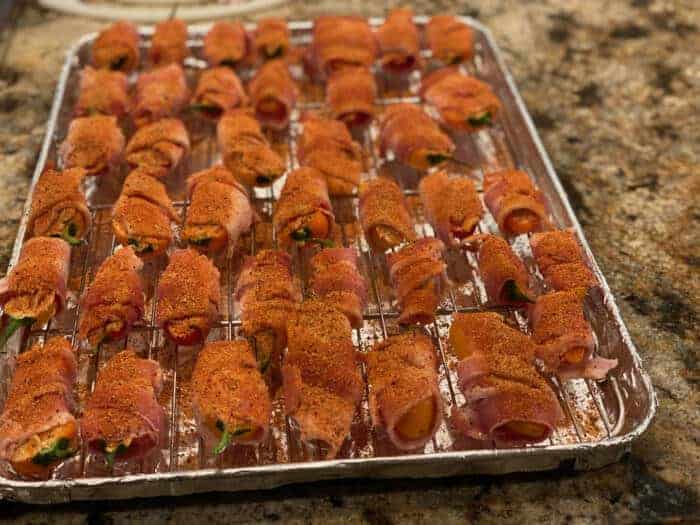 Set up your smoker for cooking at about 225°F using indirect heat. If your smoker uses a water pan, fill it up.

I used pecan wood for smoke.

Once the smoker is ready, place the stuffed, bacon wrapped peppers on the grate and let them smoke cook for about 3 hours. 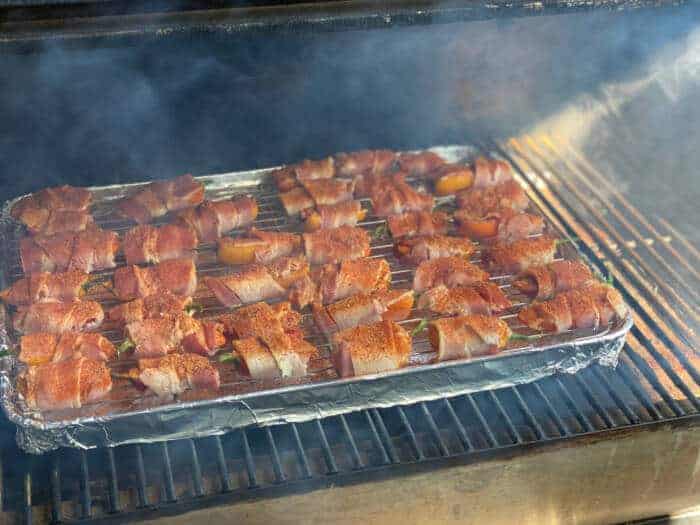 Note: if you used a pan with rack, you can place that on the smoker grate instead of laying them on the grate individually.

Keep an eye on the peppers and when the bacon starts to crisp up and the peppers are nice and soft, they are ready to eat. 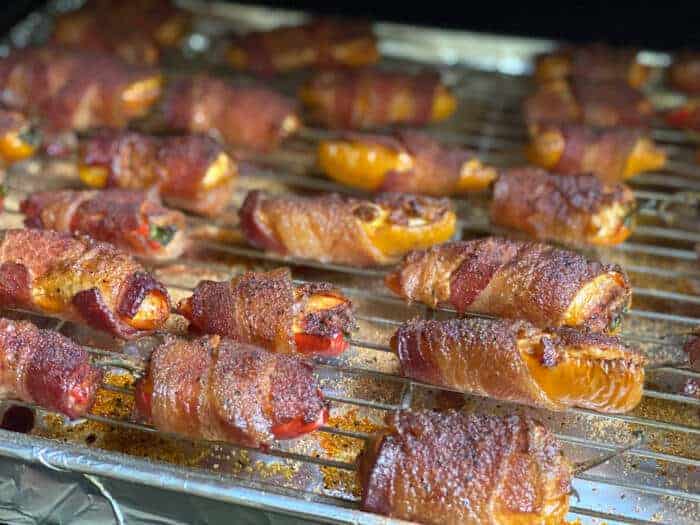 Eat a few before you bring them in because they will vaporize FAST and you may not even get any if you're not careful! 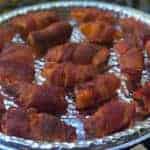 We often use jalapenos to make smoked stuffed peppers a.k.a ABT's but this recipe milds them down by using colorful sweet peppers instead.
Prep Time25 mins
Cook Time3 hrs