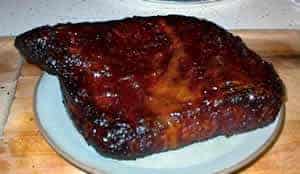 The brisket smoke will take place just before dark thirty. The big nine and a half pound brisket is sitting on the kitchen table, the quarter inch fat cap has been scored diagonally and the deep red flesh covered in my secret blend of herbs and spices and looking like a real beauty.

I have the wood laid out by the smoker, my Taylor Probe Thermometers (all 4 of them) are on top of the smoker with one of the timers set to fourteen hours and thirty minutes (my estimated smoke time) and the temperature alarm is set to 185 degrees just in case I am dozing when the brisket reaches its peak. I also have a card table full of Doritoes, bean dip, beef jerky, gummy bears and vanilla Coke… gotta have the snacks!

For all of you who think it is blasphemous to use a meat
thermometer during a brisket smoke and would rather guess at it … more power to you. I can look at it and feel of it and come pretty close as well but I would rather use the technology that is available and be right on the money.

I Make the Marinade

It is now around 8:00 and I am making a marinade out of one stick of butter, a cup of water and 2 TBS of Jeff’s naked rib rub (order the recipe here). I will marinate the brisket with this stuff every 1.5 hours once the brisket smoke has been going on for around two hours. I will also flip the brisket over each time I mop the meat with the marinade.

I fire up the smoker as soon as I am done with the marinade and give the smoker time to equalize the temperature to eliminate cold spots before the meat goes in. I love to hear the flames roaring as if they are anticipating the brisket smoke as much as I am.

Finally, darkness has arrived and I am ready to place the brisket in the smoker and begin the all night brisket smoke with a bang. I carry the brisket out of the house on a big oak cutting board and carefully place it on the center rack of the smoker where I feel the heat is the best, shut the door, and start the timer. The night has just begun.

For the next two hours or so I regulate the temperature keeping it around 220 degrees and manage to put away more than half a bag of Doritos and most of the bean dip(probably should have used less dip per chip because now I have to eat the rest of the Doritos with no dip.. oh well, no biggie.

Around 11:15 I open the door to the smoker for the first time since putting it in and I mop the top of the brisket with my butter marinade, flip it over and do the other side as well. in fact this is pretty much the formula for the rest of the night eating away at my snacks, dozing off in my chair, and awaking in time to marinade the brisket again, check the temperature, and perhaps eat more snacks. Its a hard life folks!

Around 7:15 the next morning and many marinades and flips later the brisket has reached 151 degrees and reached a plateau. Anyone who has smoked meat has no doubt experienced this strange phenomenon. The meat reaches a certain temperature and gets stuck at that temperature for sometimes hours on end. This happens to me every time I do an all night brisket smoke as well as when I am smoking ribs or chicken or whatever else I might happen to be smoking.

Shortly after 9:00 the temperature has finally started to rise again and very slowly over the next several hours it makes its’ way up to 165 then 170 then 175. I can at this point let my wife know what time to have all of the fixin’s ready. She will normally prepare sweet potatoes and rolls to go with the smoked brisket.

I normally remove the brisket once it reaches 185 degrees unless I am going to pull it, in which case I will let it get as high as 200 degrees. Sometimes, during an all night brisket smoke I will only let it reach 180 or so and will then wrap it in foil and then in several thick towels and place it in a cooler with several pillows to hold it until we are ready to eat. It will maintain temperature for several hours this way and be even more tender when you take it out.

I was dead tired but extremely satisfied. I knew that my family would be extremely satisfied as well when they tasted my handy work. I usually walk around like a zombie the rest of the day after an all night brisket smoke and usually crash into bed a little earlier than normal but all in in all it is worth every tired bone and in my opinion, you are not an official barbecue person until you have pulled an all nighter out by the smoker.

P.S. Please feel free to contact me if you have any questions whatsoever and I will do my best to get you a timely answer.