Butterflied Pork Butts in the Smoker 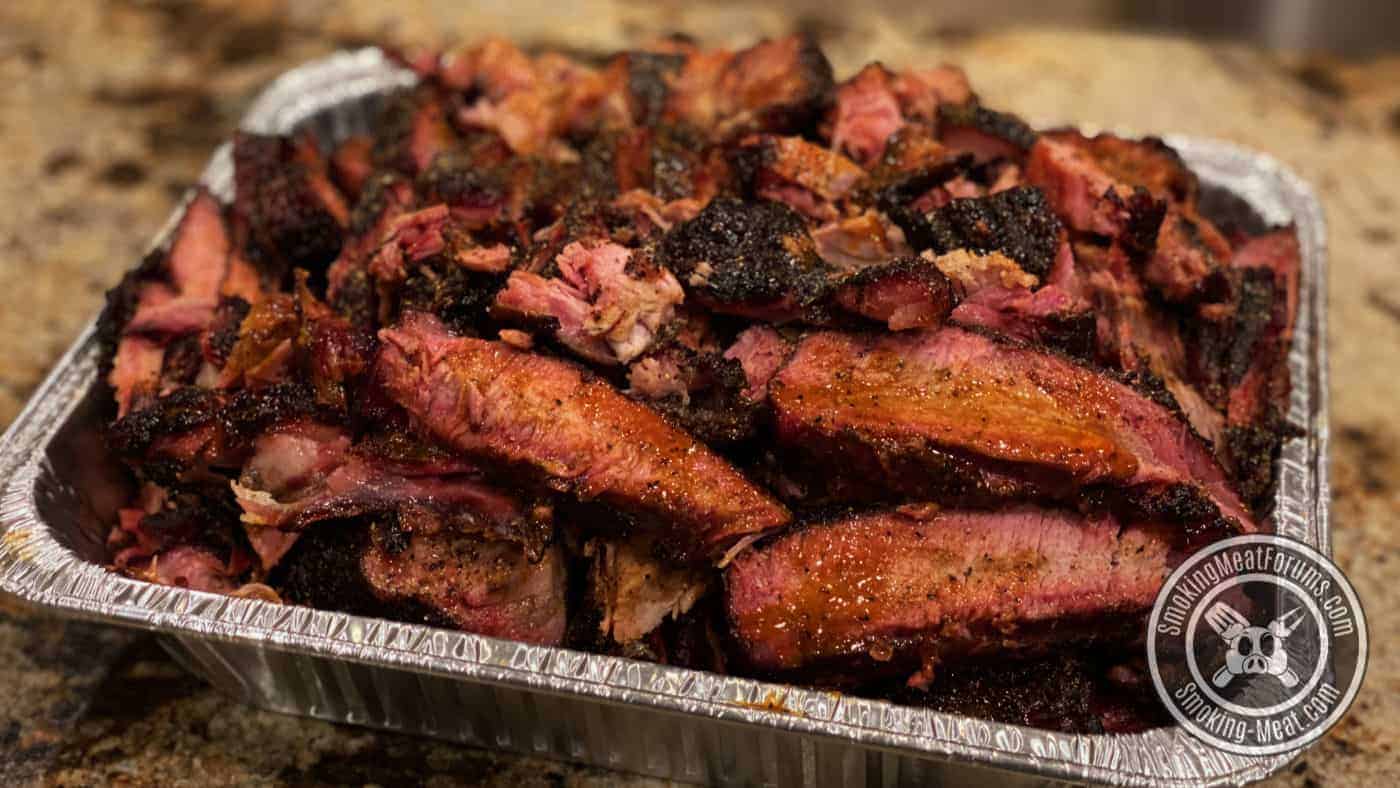 I often remove the bone from  pork butts before smoking them and sometimes I get them from the store with the bone already removed. The boneless aspect of this is not necessary but does give you a lot more flexibility with getting them done faster, creating more bark on the outside and more smoke access. It's a great method and in this recipe I'll show you exactly how I do it.

Please note that my rubs and barbecue sauce are now available in 2 formats– you can purchase the formulas and make them yourself OR you can buy them already made, in a bottle, ready to use.
Step 1: Butterfly the Butts

I purchased a 2-pack of boneless butts with a total weight of about 15 lbs. 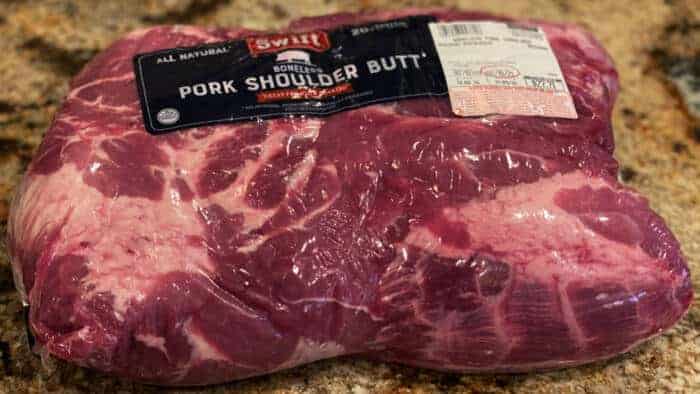 There is a fat cap on the top side (which I trimmed off but you don't have to). 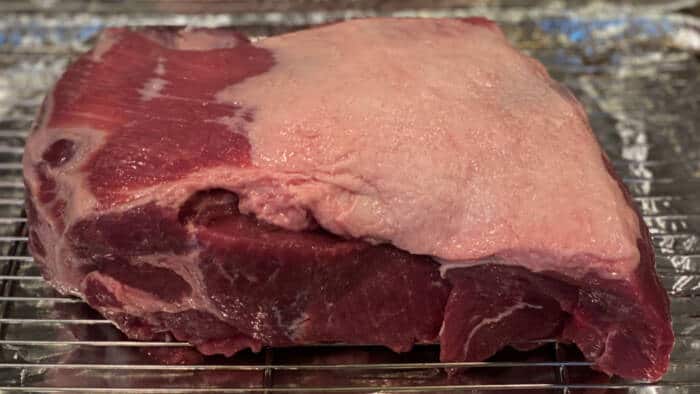 If you lift up the area where the bone was removed, you'll see that it's well on the way to being butterflied already. 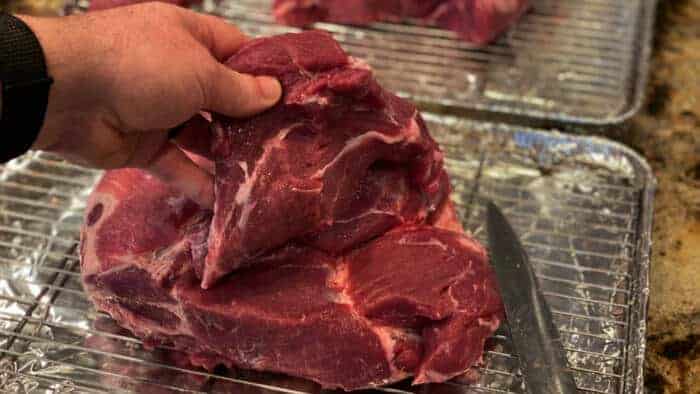 Use a sharp knife to finish the job by cutting through the meat on the far end and then deeper into the area on the left in the image above.

Here's what it looked like after I continued cutting as described above.. almost done. 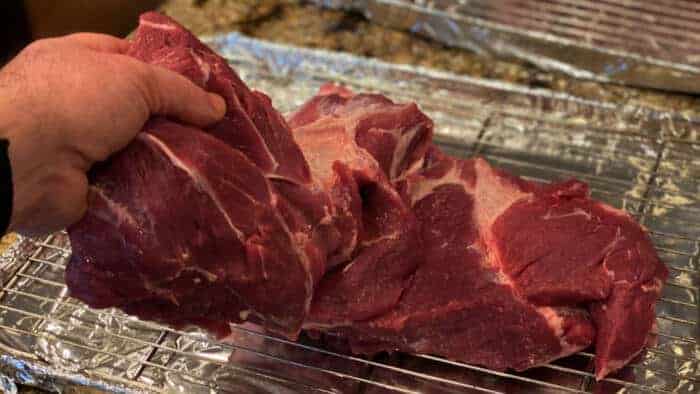 Finish cutting deeper into the pork butt without going all the way through then lay the meat open like a rack of ribs. 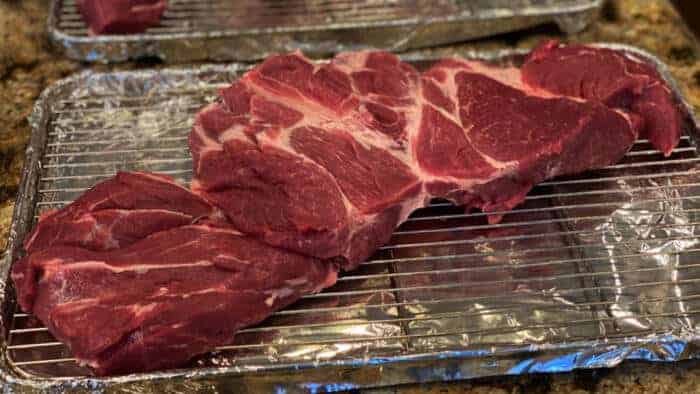 With the meat laid open, I placed it on a pan and rack for seasoning.

There is nothing better than Jeff's original rub (Purchase formula here | Purchase bottled rub) where pork is concerned. It creates amazing bark and you just can't beat that.

As per usual, I used some yellow mustard on the meat to create a nice “adhesive” for the rub to stick to. 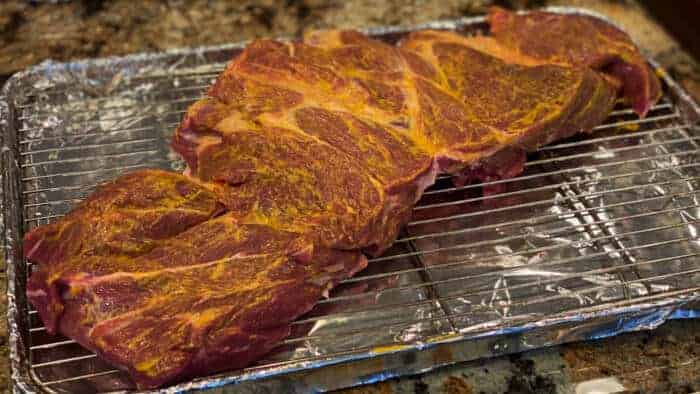 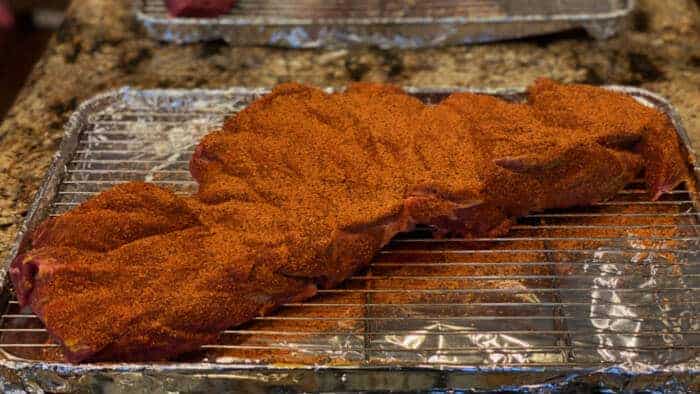 I used this time to go get the smoker going but how you use your time is entirely up to you;-)

After about 15 minutes, the rub will have stuck to the meat pretty good and obtained a sort of wet look. Flip the meat over and do the exact same process to the other side.

Looking good and ready to go into the smoker.

By the way: that smaller piece in the front was a piece that came apart from the rest of the meat when I was trimming the fat. No problem at all.. just make sure it gets some mustard and rub as well. 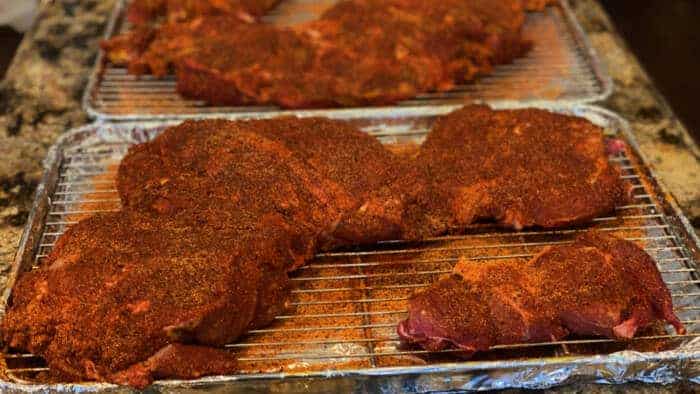 Setup your smoker for indirect cooking at about 225°F (107°C) using hickory, pecan, apple or whatever smoker wood you have available. If your smoker uses a water pan, fill it up for some nice humidity in the smoker.

Every smoker is different but in my pellet smoker, it took 11 hours for the meat to reach 190°F (88°C) in the thickest part. I wanted it to be tender but sliceable. If you're interested in pulled pork, just let it go a little longer to an internal temperature of about 207°F (97°C).

Be sure to use a tried and true leave-in meat thermometer so you can monitor the temperature without opening the lid any more often than necessary. I am using the Smoke X in the image below which is capable of 4 unique inputs. You can read my review of this excellent piece of equipment HERE.

Here it is about 6 hours in after mopping it for the first time. 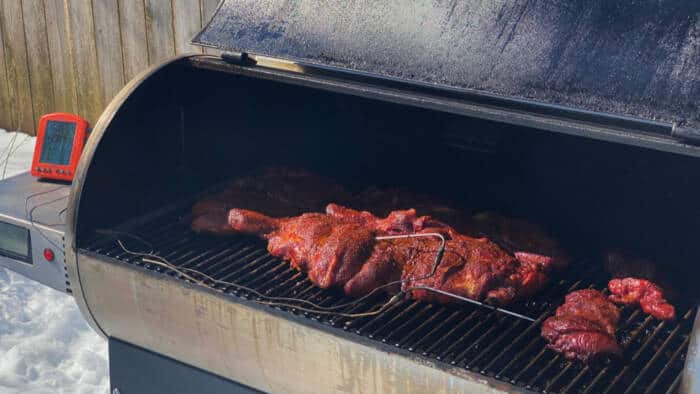 You might be thinking that it should have gotten done a lot faster since it was butterflied however, it was around 25°F during the cook, there was snow on the ground with plenty of cold wind. On a nicer day, it may have cooked faster. I also opened the door quite often to snap pictures, apply my rub/butter mop, etc.

I could have wrapped it once it reached about 160°F (71°C) but since I wanted maximum bark, I opted to let it cook open even if it took longer.

Once it reaches its done temperature, bring it into the house to rest.

I recommend letting the meat rest for 10-15 minutes before slicing it to let the juices settle down a little bit. 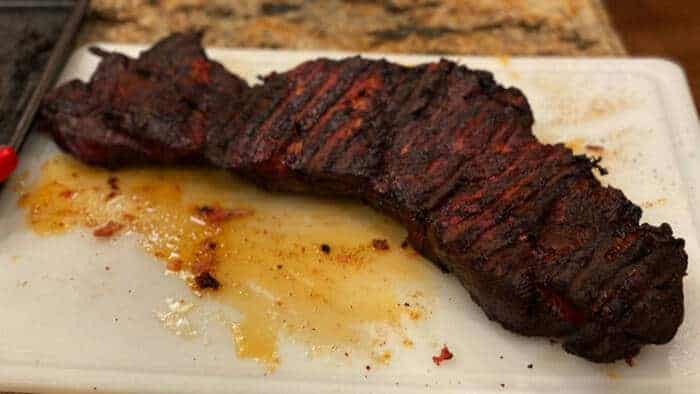 Look at that smoke ring and the juicy meat! 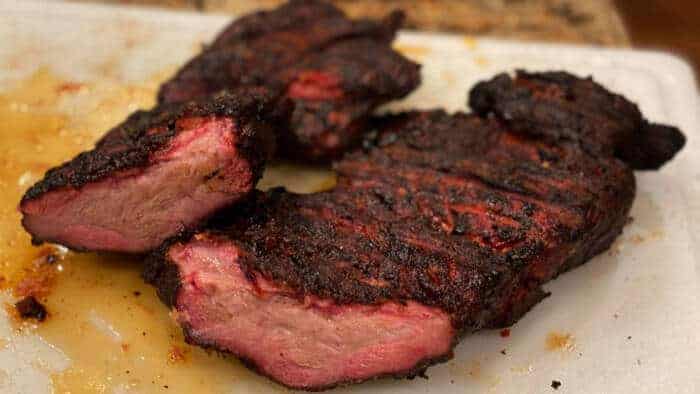 I sliced mine like ribs but it was really tender even at 190°F (88°C) internal temperature and so I had mostly slices with some pulled meat by default. No complaining on my end! 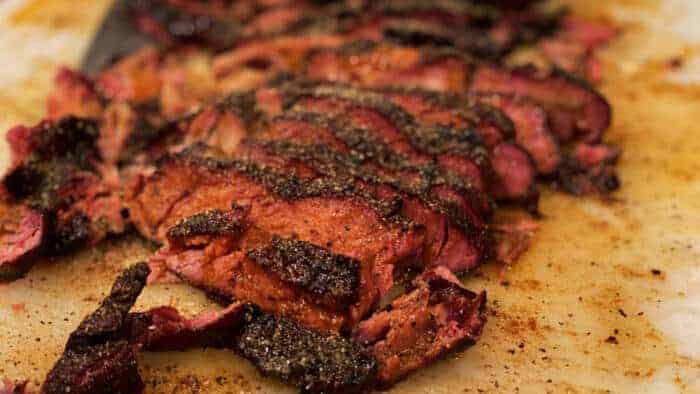 Place the meat into a pan or platter depending on how fancy you wanna be and call dinner!

You'll notice that I poured the extra rub butter mop over the top and sprinkled on some of my Texas style rub (Purchase formula here | Purchase bottled rub) for some extra saltiness which I thought it needed. 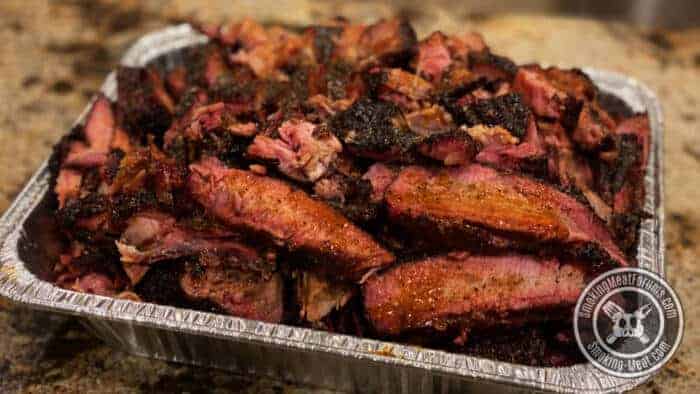 These slices were about ½ inch thick and made some amazing sandwiches.  Also good on fajitas, tacos, etc.

Opening these pork butts up probably doubled or tripled the amount of bark and that alone was worth it in my opinion.

In a future recipe, I will use this butterflied pork butt method to stuff the meat with something and then roll it back up, tie it and cook it in the smoker. Feel free to jump the gun and try that option. If you come up with something really good, let me know! 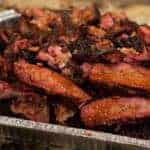 Butterflied Pork Butt in the Smoker

Notice: This page may contain ads and/or links that pay a small commission to SM.
Page load link